How to get KaLae Resort
Our resort is around 22 kilometers from the city by car.

Nakhon Sawan Province,is about 237 kilometres north of Bangkok. Nakhon Sawan also known as “Pak Nam Pho” is where the rivers of Ping, Wang, Yom, and Nan converge and form the Chao Phraya River, the most important waterway of Thailand.

Nakhon Sawan is in the lower northern part of the country between Northern Thailand and the Central Plains. It is regarded as “the doorway to the North” and it is the hub of transportation in the Lower North. 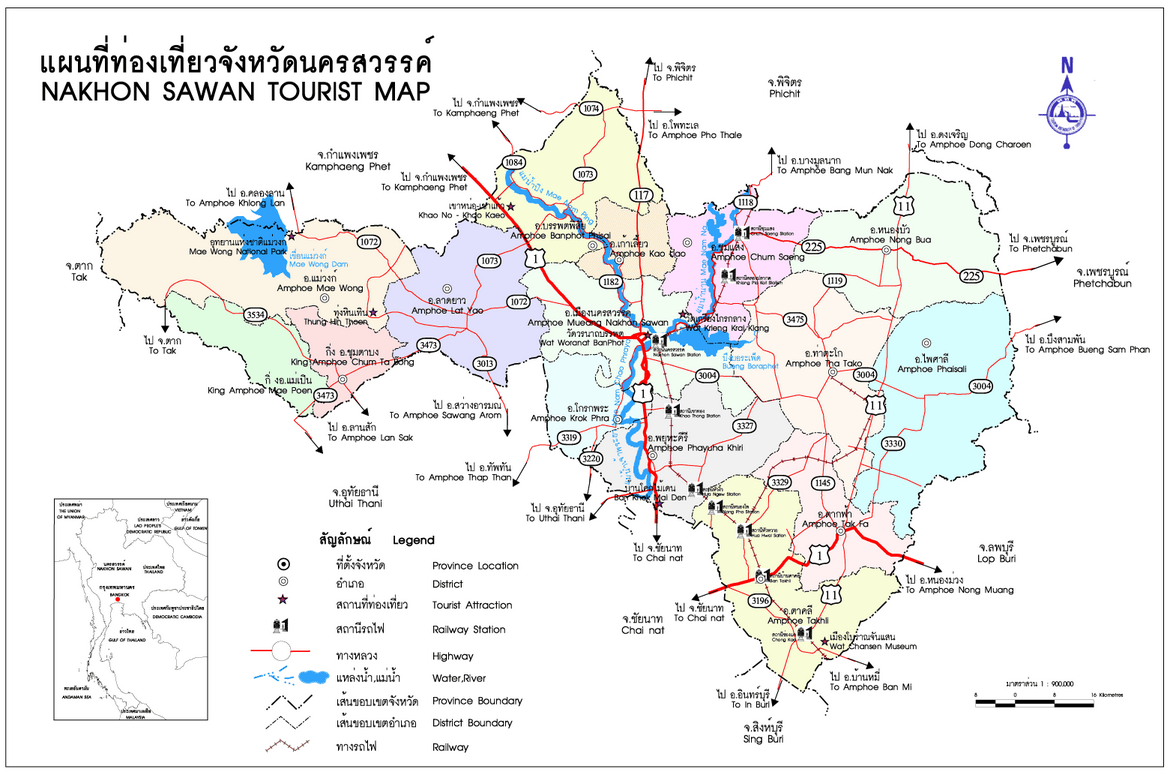 By mini-bus
You can take a mini-bus from Victory Monument (near the Pong Lee Restaurant) to Nakhon Sawan (stops at the Big C supermarket) for 180 baht one way and takes approximately 3hrs.

By bus
There are also several regular air-conditioned buses running daily between Bangkok and Nakhon Sawan. For more information, you can ontact the Northern Bus Terminal at Mo Chit (Tel. 66 2279 4484-7) for details. Time approx 4hrs. The Nakhon Sawan bus station is to the west of the city centre.

By train
The Northern Line trains run many times a day from Bangkok through Nakhon Sawan and ends in Chiang Mai. For more information, please contact the Travel Service Division at tel. 66 2223 7010, 66 223 7020 The train station is a little out of town, ~6kms. Tuk tuks are waiting to take you into town.

Songthaew are plentyful during the day, but it’s difficult to find a tuktuk, there usually are some waiting at the “Big C” and bus station.

Here a list of things you should do or visit while in Nakhon Sawan:

Sawan Park is in Nakhon Sawan Municipality beside the Asian Highway. It was originally a large swamp with an area of 502,400 square meters called Nong Som Bun. It was later made into a sizable public park with 2 ring roads encircling it. The middle of the park is a beautiful island with an area of 6,400 square meters. The park has a garden, lawn, fountain, outdoor stage, waterfall, and rose garden. Activities in this Park are Aerobic Dance, Jogging, Thai-Chi, Football, Basketball …and there are Fitness Machines to use the park.

Mae Wong National Park is on the Thanon Thong Chai Mountain Range. The area consists of winding mountains and is the source of several waterways, including the Mae Wong River and some parts of Khlung Canal. The waterways flow into the Ping River and the Chao Phraya River. Mae Wong National Park is in Amphoe Pang Sila Thong in Kamphaeng Phet (446.4 square kilometers) and in Amphoe Mae Wong-Mae Poen in Nakhon Sawan (446.48 square kilometers), totaling 892.88 square kilometers. The north borders Khlong Lan National Park of Kamphaeng Phet, the south borders Huai Kha Khaeng Wildlife Reserve of Uthai Thani, the east borders villages in Kamphaeng Phet and Nakhon Sawan, and the west borders Um Phang Wildlife Reserve in Tak. The area was proclaimed a national park on 14 September 1987 and was the 55th national park of Thailand. The park headquarters are at No. 65, Khlong Lan-Um Phang Road, Amphoe Pang Sila Thong, Kamphaeng Phet.

The Origin of the Chao Phraya River:

The Origin of the Chao Phraya River is the point where the Ping and Nan rivers converge at Tambon Pak Nam Pho in front of the dam in the city. Here, one can clearly distinguish the difference between the two rivers. The Nan River is reddish in color while the Ping River is somewhat green. They flow to form the Chao Phraya River, the most important waterway of the country. The Chao Phraya flows past several provinces before going through Bangkok and ending into the Gulf of Thailand in Samut Prakan. It is about 370 kilometers long. The best place to view its origin is at the Chao Pho Thepharak-Chao Mae Thapthim Shrine.Tourists can take boat rides to view the scenery on both banks and pay homage to Luang Pho To Buddha image at Wat Pak Nam Pho (Wat Thong Thammachat Nua). Boats can be hired from Chao Phraya Pier.

Chao Pho Thepharak-Chao Mae Thapthim Shrine is in the area of Pak Nam Pho Community on the right bank of the Chao Phraya River. The shrine is revered by locals and is the spiritual magnet of the people in the area as well as passersby using the river. The shrine also offers the best view of the beginning of the river.

Wat Woranat Banphot (Khao Kop) is an old temple of the province on the peak of Khao Kop 185.5 meters above sea level. There are 2 ways up; a stairway of 439 steps and an asphalt road 3 meters wide. The peak has a replica of Lord Buddhas Footprint and a pagoda encasing the relic of Lord Buddha built when Sukhothai was the country’s capital. The temple was praised by the Department of Religious Affairs as the best development temple of 1966. A nearby hill is the site of some television relay stations.

Khao No-Khao Kaeo is a limestone mountain that has Wat Khao Lo at its foot. A stairway leads to the cave at the peak where a large Buddha image sits in front. When King Rama V visited here via the Ping River, he stayed overnight on the mountain. The province later built a monument to commemorate the occasion. There are numerous monkeys at the foot of the mountain and you can see plenty of bats that live in the cave flying out to feed in the evening, making a long black line in the night sky. Khao Kaeo nearby also has a number of bats flying out at night.

Bo Ya Cave is Hin Kon Village in Tambon Nong Krot, around 30 kilometers from the city on the San Nakhon Sawan-Lat Yao road. Another 6-kilometer road leads to Wat Tham Bo Ya (Wat Thep Nimit Song Tham). A stairway at the foot of the hill leads up to the cave. The cave itself has 3 sections. The first has a large main Buddha image, the second further in is a dead end with a pond called Bo Nam Thip that is believed by locals to be sacred and the third section is an exit out the other way. Apart from the sacred pond, the cave has beautiful stalagmites and stalactites.

This old Temple on the Bank of the Chao Phraya River has lasted for over 200 years and is located in the Mon community. Several activities and traditions of the Mon culture such as Saba, Luk Chuang, Boat racing and the Songkran festival are still observed. Built in 1793, Phra Wihan – an image hall, which was adapted from former Phra Ubosot – an ordination hall- of the late Ayutthaya to early Rattanakosin period still remains to be seen.The building houses mural paintings of the royal school of artisans depicting the congregation of angels known as “ Thep Chumnum “ in the Ayutthaya style.King Rama V , on his personal visit to the North, stopped here on 12 August 1906 to pay homage to the principal Buddha image inside the Phra Ubosot. The king was pleased with the so-called Phra Sangkatchai (Sangkajiayana) image in a standing posture and asked for it to be enshrined elsewhere. An amount of money was bestowed for another image to be built to replace the original one. It has been housed within the Phra Ubosot until present.

Yeab Cha “Yeab Cha” is for curing paralyzed people, tiring legs or arms and the body by using feet touch, Thai herb with oil, then touch the hottest iron on the stove and put that foot on the part of the body which had been paralyzed or was tiring. While putting the hot foot on the parts of the body it sounded that “ Cha” so it is called “ Yeab Cha”.